Catamaran ZINGARA is available for charters in Caribbean 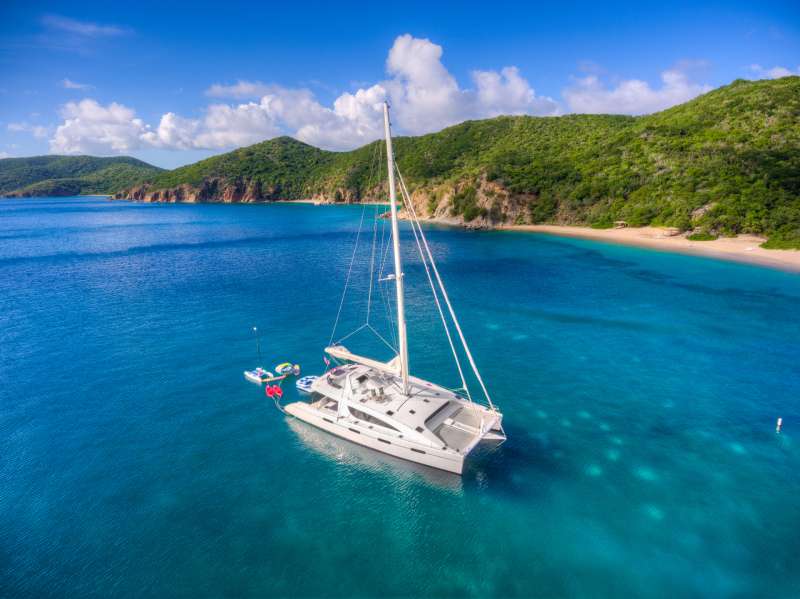 All sheets and blankets are new, and we have luxurious comforters and bathrobes on order. 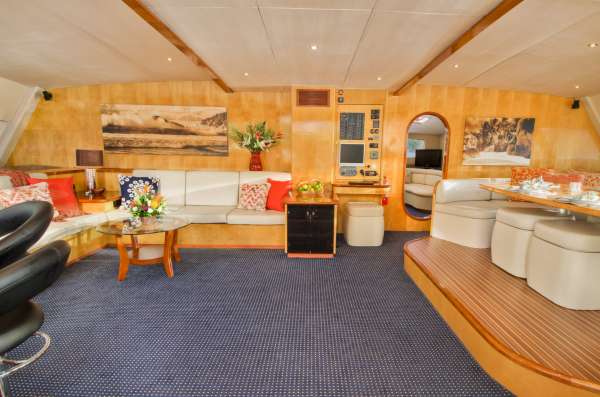 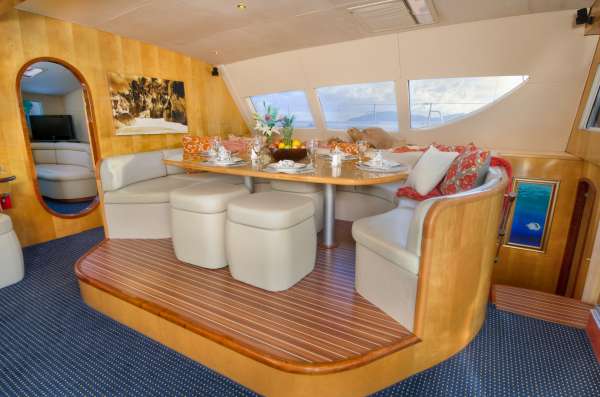 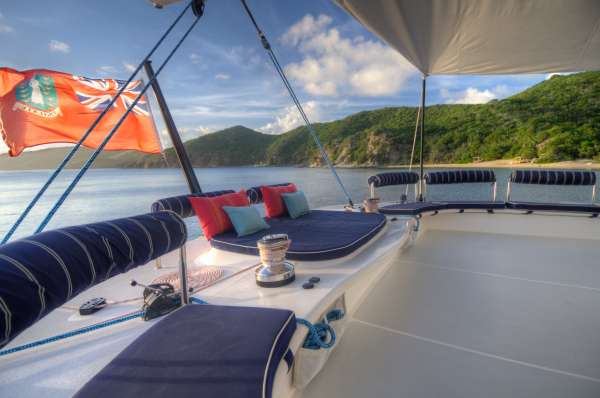 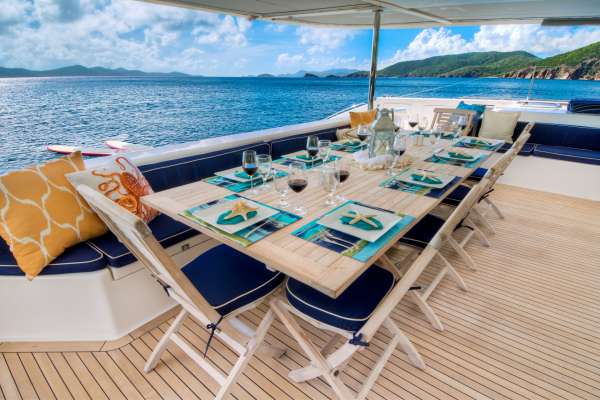 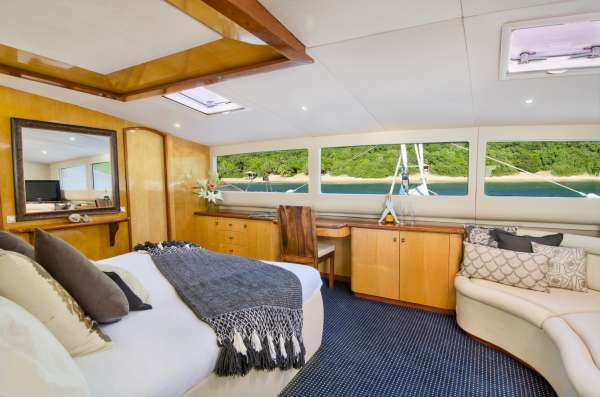 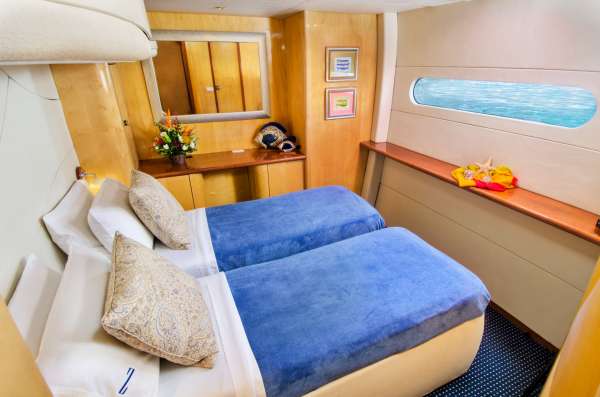 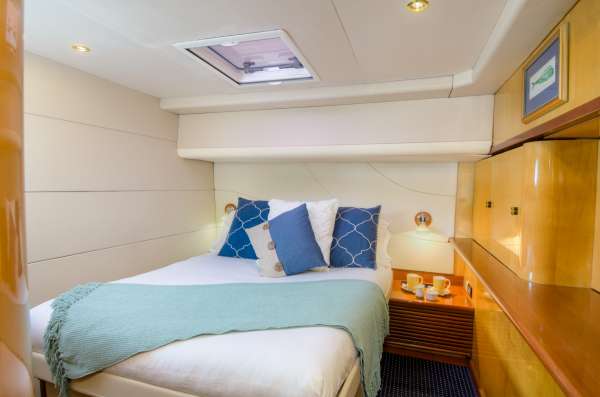 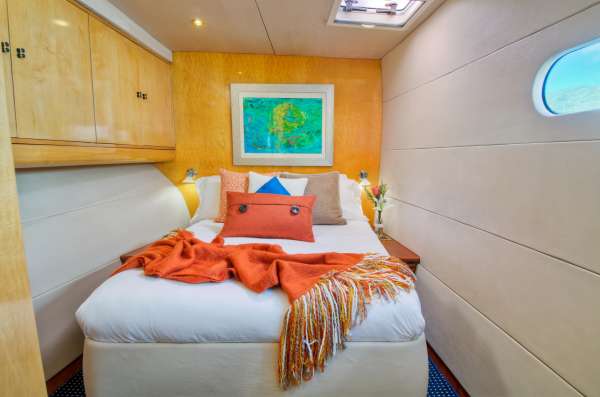 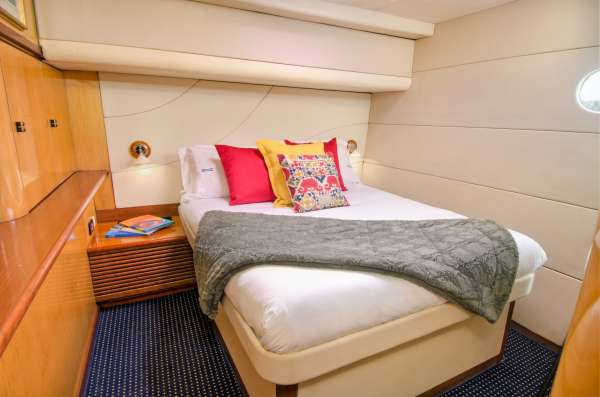 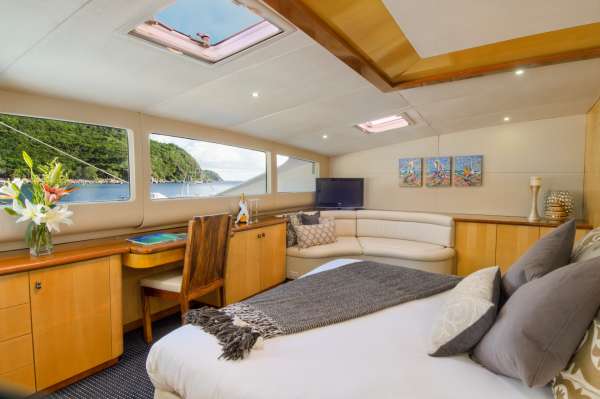 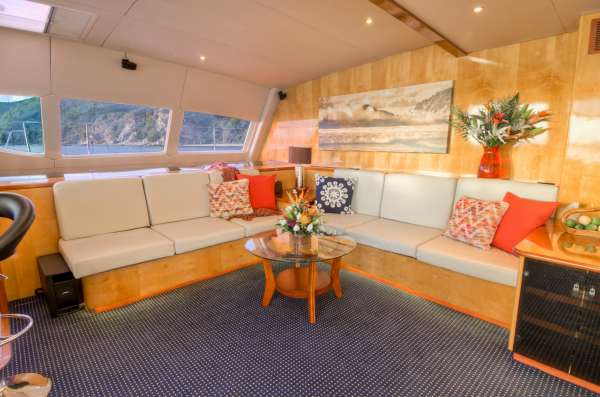 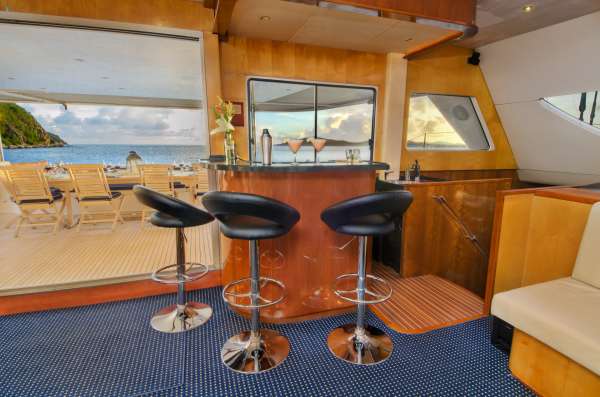 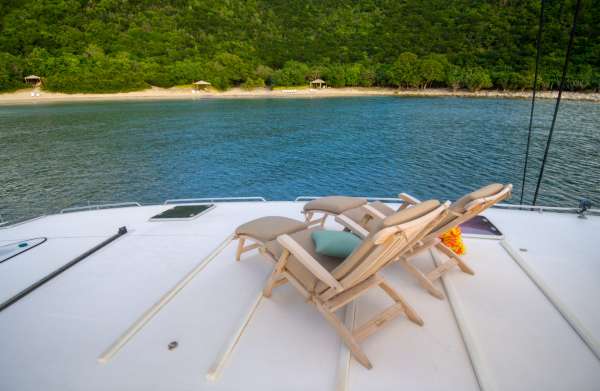 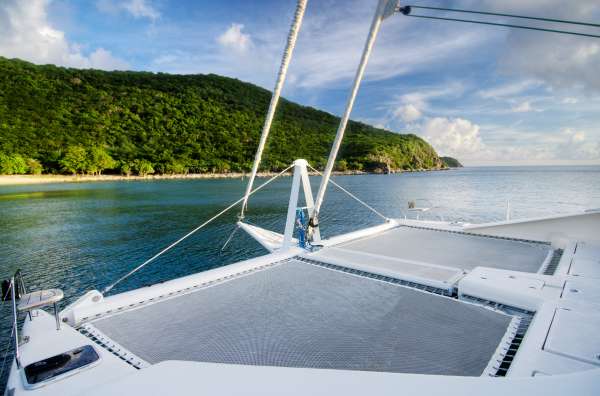 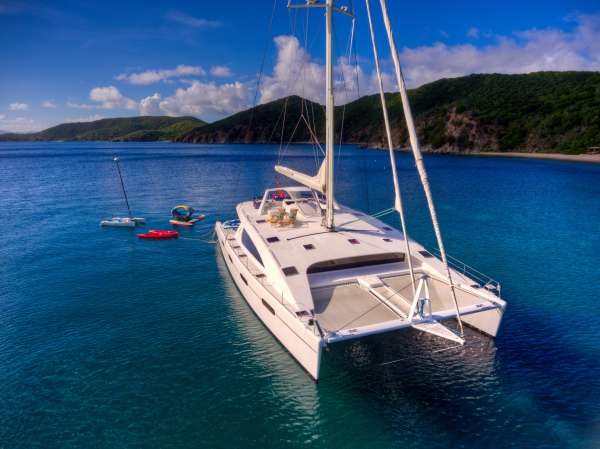 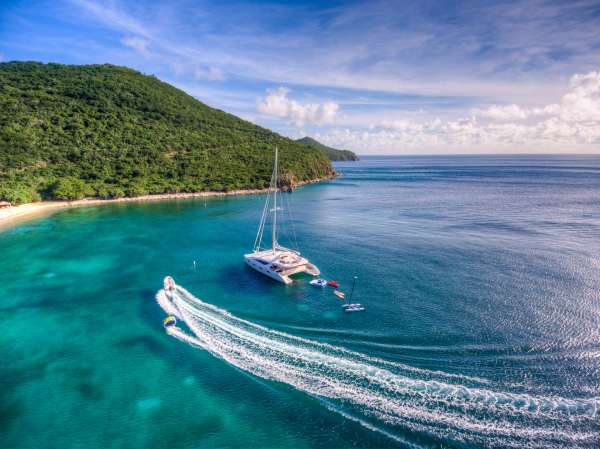 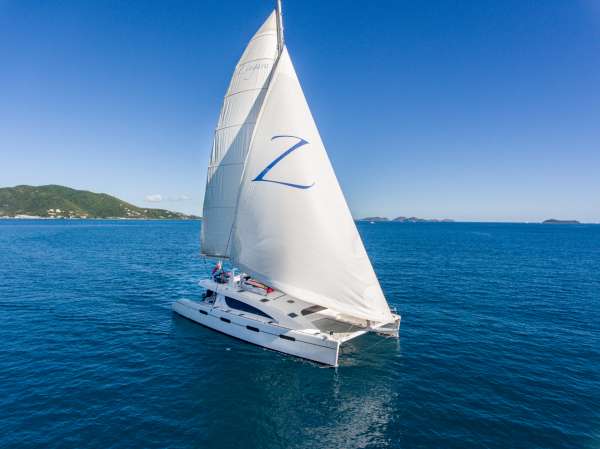 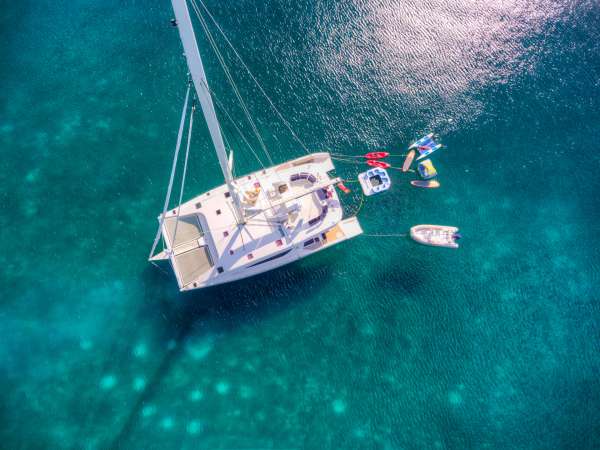 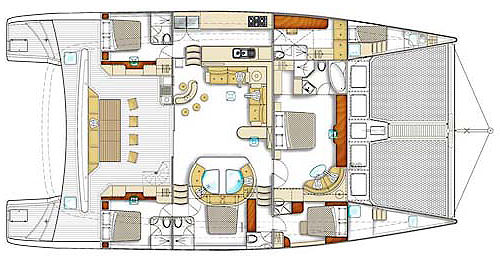 Extra Water Sports equipment can be obtained - just let us know your requirements.

Communications:
We have free unlimited High Speed Wifi around the boat for your use while in the BVI. For charters outside the BVI, WiFi can be arranged at an additional fee.
Crew Profile 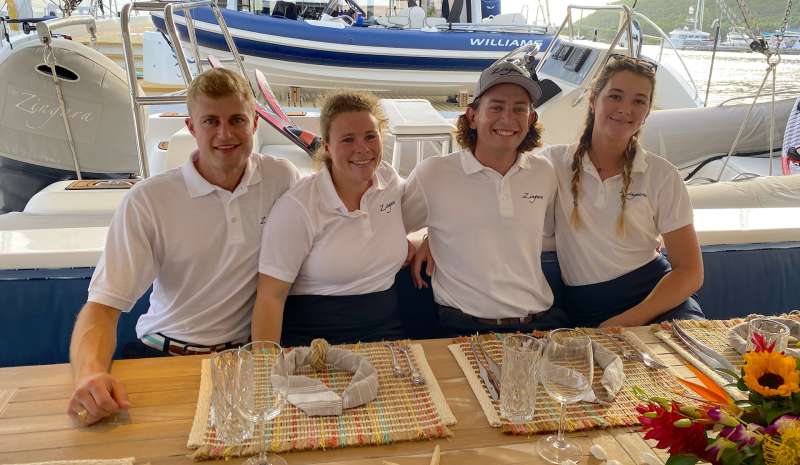 Your professional crew aboard catamaran ZINGARA

Growing up in Pretoria, South Africa Hugh spent his youth on the water where his passion for water sports and sailing emerged at an early age. He is an avid fisherman and is passionate about life on the water.
Upon graduating, Hugh went straight into yachting and completed a Mediterranean season in France where his interest in the industry grew.
Followed by a 12,000 nm delivery which included two Atlantic crossings and sailing up the east coast of Africa, Hugh’s enthusiasm for sailing, fishing and diving only increased, and flourished.
Hugh spent two years sailing through Caribbean as the first mate where he worked on a catamaran that spent most of its time chartering in the British Virgin Islands, with this experience he is extremely knowledgeable on the best locations for making your charter unforgettable.
He looks forward to welcoming you on board and creating the trip of a lifetime.

Maxime Hughes, Chef
Born and raised along the coast in the Eastern Cape of South Africa - Maxime thrived as she came to realize her love of the sea.
After completing a Hospitality Management degree and working a further 3 years in various luxury environments, she finally combined her passion for the ocean with experience gained and grew her skillset to work in yachting and explore the rest of the world.
She started her career as sole stewardess on a sailing yacht in Monaco and began her first circumnavigation, embarking on an extraordinary adventure sailing the world. Following which she joined the Oyster World Rally, also participating in the Oyster Antigua Regatta which really ignited her passion and love for sailing.
Having done a circumnavigation while first working as a stewardess and then becoming chef, she has prepared food in various parts of the world and therefore her cuisine is beautifully diverse and influenced by global flavours.
During her career she has sailed over 50 000 nm thus far, sailing through the North and South Atlantic, the South Pacific, the Indian Ocean, the Mediterranean and Caribbean Sea. Maxime is a vibrant and positive individual, whose caring attitude shines even while working under pressure. She strives to create a guest-centred environment, catering to your needs and specific tastes.
She looks forward to having you onboard and satisfying all your culinary needs.

Originating from the south coast of England, James has never been too far from the ocean. After being taught how to scuba dive by his father and gaining an overwhelming urge to see the world, James travelled to Thailand to become a scuba instructor where he would spend the next 5 years mastering his craft.

To gain a better understanding of the diving industry, he then moved to places such as the Cayman Islands, Barbados, Bahamas, and Mexico where he would gain much experience and simultaneously, realize a love for the Caribbean as well as, discovering a real sense of adventure that would be working on boats. James has set a goal of becoming a captain and one day owning his own boat.

Erin was born in Mexico City and moved to Europe when she was 13. She obtained a degree in Hospitality and Business Management in Valencia, Spain. After spending a few years working in the hospitality industry, she embarked on a journey to Japan to spend a year in a silent Buddhist monastery where she learned to connect with nature which in turn, helped her decide on her next venture: moving to Thailand and starting a career in the scuba diving industry. Once she became an instructor she worked in different countries sharing her love for the ocean. She is now combining her two passions while working in the yacht industry and being a part of Zingara’s crew.